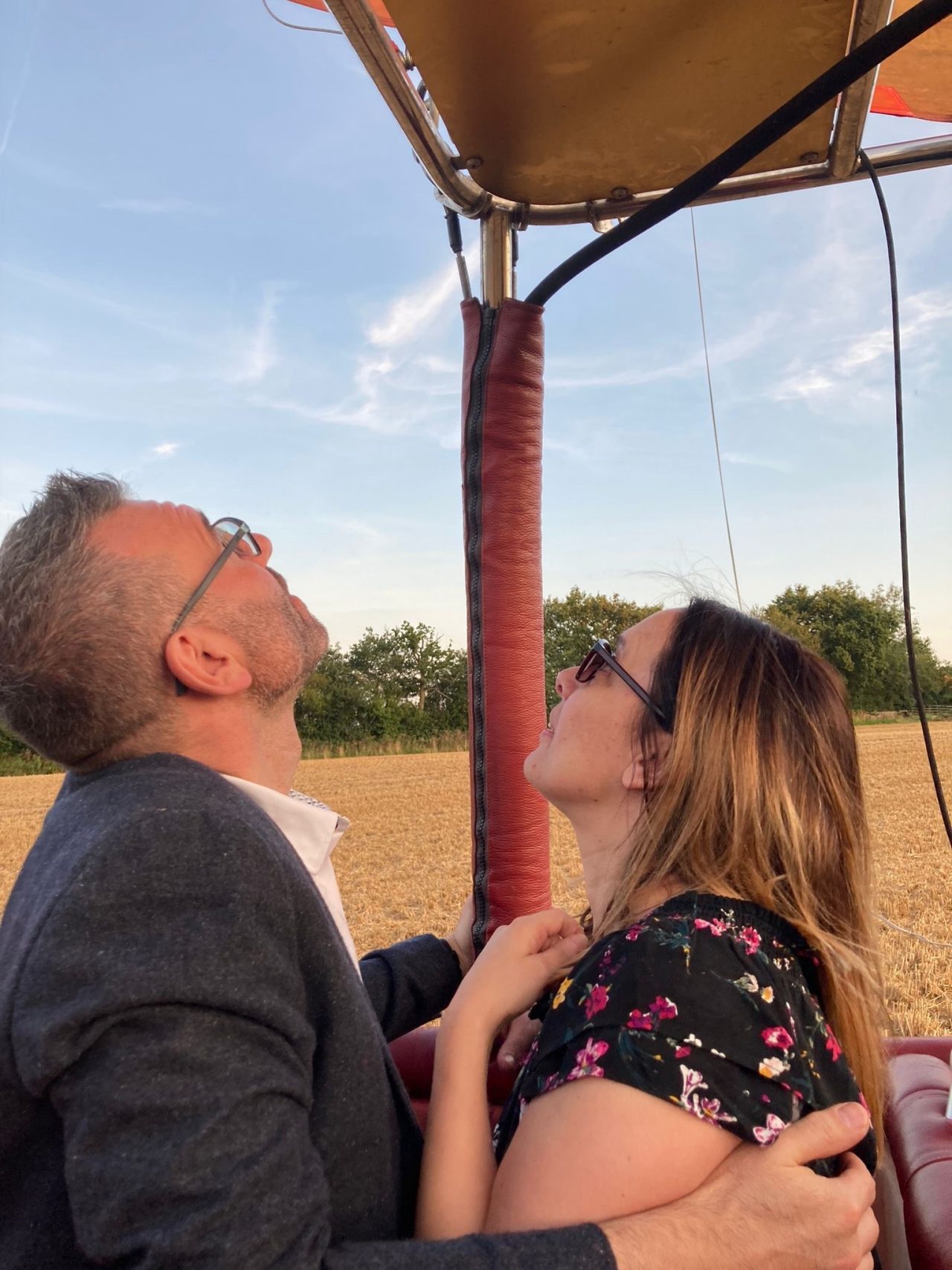 Love at first sight, romantic date nights, and months of planning for one very special moment....what could possibly go wrong?

When the best laid plans seemed to be coming undone for Steve and Jackie, pressing on and refusing to give up resulted in a thrilling and memorable experience, promising a fruitful future to follow.

Steve and Jackie's journey began when they met online a year ago. It didn't take long for them to click and after a string of conversations back and forth, a first date had been arranged.

Both Jackie and Steve felt that 'spark' the moment they met face to face. After a lovely evening, they shared a kiss and went their separate ways for the night, with a promise to see each other again very soon. 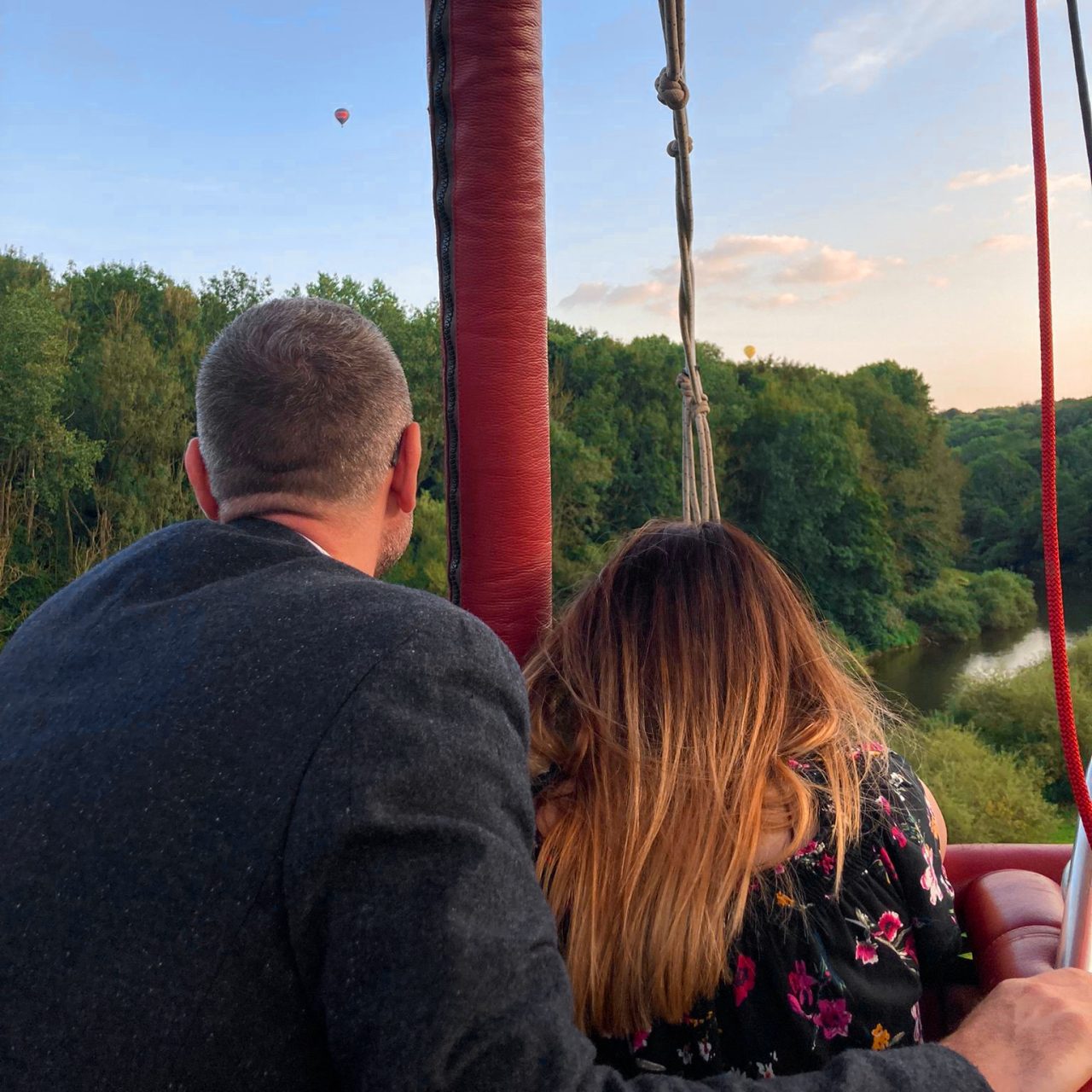 On Valentine's Day this year, Steve recreated their first date by turning his garage into a private pub and cinema. They watched Rocketman together from the best seats in the house and capped it off with the purchase of a hot-air balloon flight.

Fast forward to the end of August. One year on from that initial conversation online, they booked a hotel and a fine restaurant meal, using their balloon voucher to fly at the upcoming Telford Balloon Fiesta. Little did Jackie realise, Steve had already asked for Jackie's parents' blessing (as well as that of her daughters) for her hand in marriage and with those four enthusiastic "yes" answers, she had no idea of what was to come other than a very exciting date.

After booking their fiesta flight, unforeseen issues began to spring up for the couple before they arrived, causing them to stay at a different hotel from where they had planned that placed them further away from the balloon launch site. This meant time and distance were not on their side when they set off for their evening flight and their stress mounted.

Unsure how to find the launch site from their new hotel and with the 6pm meet time looming, they decided there was nothing else for it - they abandoned their car at the side of the road and ran towards the fiesta. Down a path and through the woods, by now it was 5:58pm and passers-by told them the launch site was still 'about 15 minutes away'.

Several calls were made to Steve by the balloon crew trying to find out where they were and direct them in, as the only passengers remaining to arrive.

The panic continued to build, knowing there was no way they would reach the balloon in time but Steve, who had been planning this day for months, knew that wasn't an option and urged his fiancée-to-be to press on.

Steve surged ahead to see if he could catch anyone and explain the situation before the balloon could take off without them and leave his plans on the ground. Now on her own, Jackie was certain that they had missed their flight and their romantic date was off.

But just as all hope seemed lost, Steve came running back.

Beckoning her over he revealed: "I've just spoken to them! They're holding the balloon for us! They're waiting for us, come on!"

At the mercy of weather conditions and how much daylight remains, hot air balloon launches generally can't be delayed from their planned flight times.

But that evening, luck was on Steve and Jackie's side as the entire mass ascent for all balloons had just been delayed for 30 minutes after the planned launch time. The forecast drop in wind levels was coming in later than expected, meaning the event's flight director asked everyone to hold off until conditions improved.

With one last chase to find the boarding site, they were finally ushered onto the field to meet the balloon crew and their fellow passengers. Steve took Pilot Dominic aside for a quiet word about his plans. Jackie, still blissfully unaware, simply thought he was asking whether face-masks would be required on the flight.

With that in place, they finally took off and after thirty minutes in the air, Dominic gave Steve the nod - their signal that the time was right to pop the question. Drifting across the peaceful silence of the sky, Steve shared his fondest memories of his time with Jackie over the past year, then dropped to one knee.

"Will you marry me?"

The answer, in Jackie's own words: "...to which I obviously said YES!"

After a smooth landing and a celebration with Prosecco followed by a romantic meal together after parting ways with the other passengers, they returned to their hotel suite to pass out from sheer exhaustion after "an amazing but very busy and crazy day." 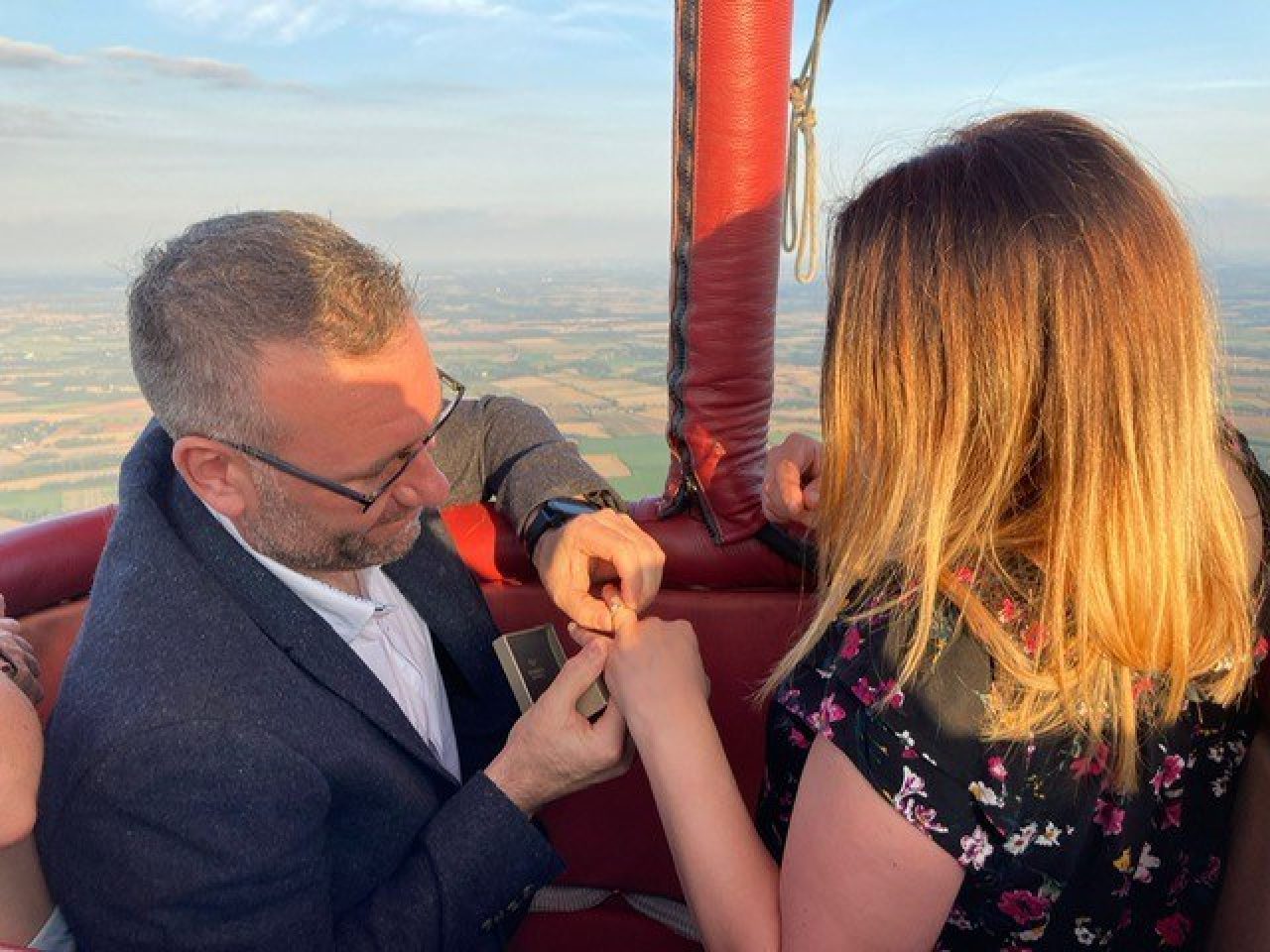 Propose In A Hot Air Balloon

We love a happy ending here at Virgin Balloon Flights and we're so pleased Jackie and Steve shared their experience with us.

From everyone at Virgin Balloon Flights, congratulations to the happy couple on their engagement and the very best of wishes for what's to come!

For any of you wanting to give your engagement that extra-special finishing touch, we would absolutely love to be a part of it.

But ensure you always have a back-up plan in place. Hot air ballooning is fully weather dependent and while we see lots of wonderful proposals in the sky, we can't guarantee it will happen on a specific date.

If you are looking to propose on a hot air balloon ride, give our team a call on 01952 212750 and they can explain how it all works in detail.