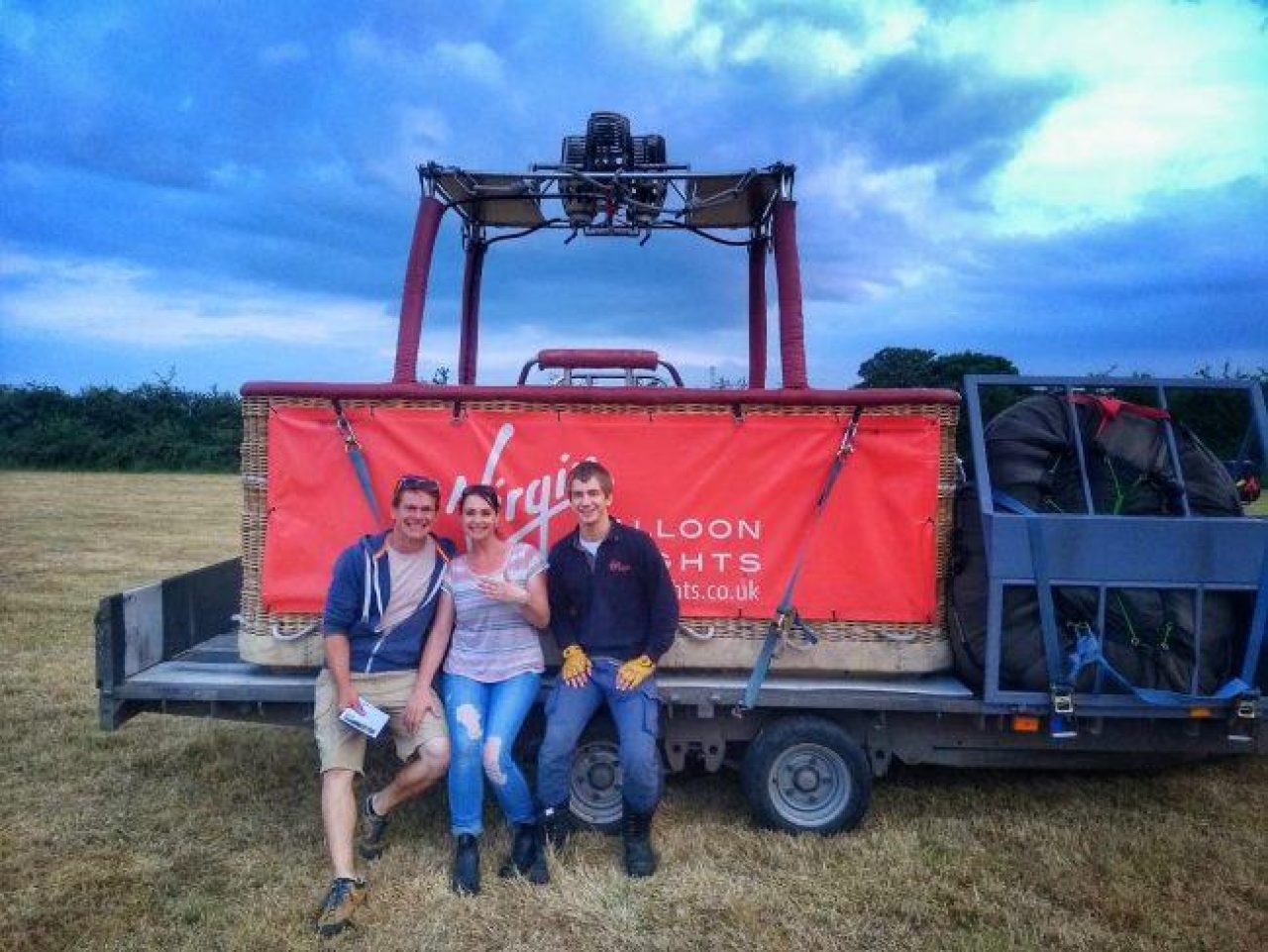 Best Time For Engagements? A Tuesday In July

Passengers often choose our flights for special occasions in their lives, such as… yes, you guessed, engagements.

The happy couples decided to share the stories of their engagements with us.

Here at Virgin Balloon Flights we sometimes see such special moments, like Dayne’s engagement to his girlfriend, as they happen.

Before the balloon launched, Dayne revealed his plan to our pilot Tom.

He then captured the emotion of the moment on camera.

We talked to Dayne about his and Helen’s special day and surprise proposal.

Helen’s parents bought the flight for Dayne as a 30th birthday gift, and he decided to make it even more special.

Dayne told us about his decision to propose on board of our hot air balloon:

“I only asked for her parents’ permission the day before, and purchased the ring on the morning of the flight.

"The flight was really good, we both enjoyed it, Tom was really helpful.”

A Relationship Of 30 Years

Not only do our pilots witness and help passengers on their engagements, but sometimes they feature in their photos too!

Pilot Dom sent us this image of himself posing with Matt and Harriet shortly after their flight.

The two got engaged on the same day as Dayne and Helen. 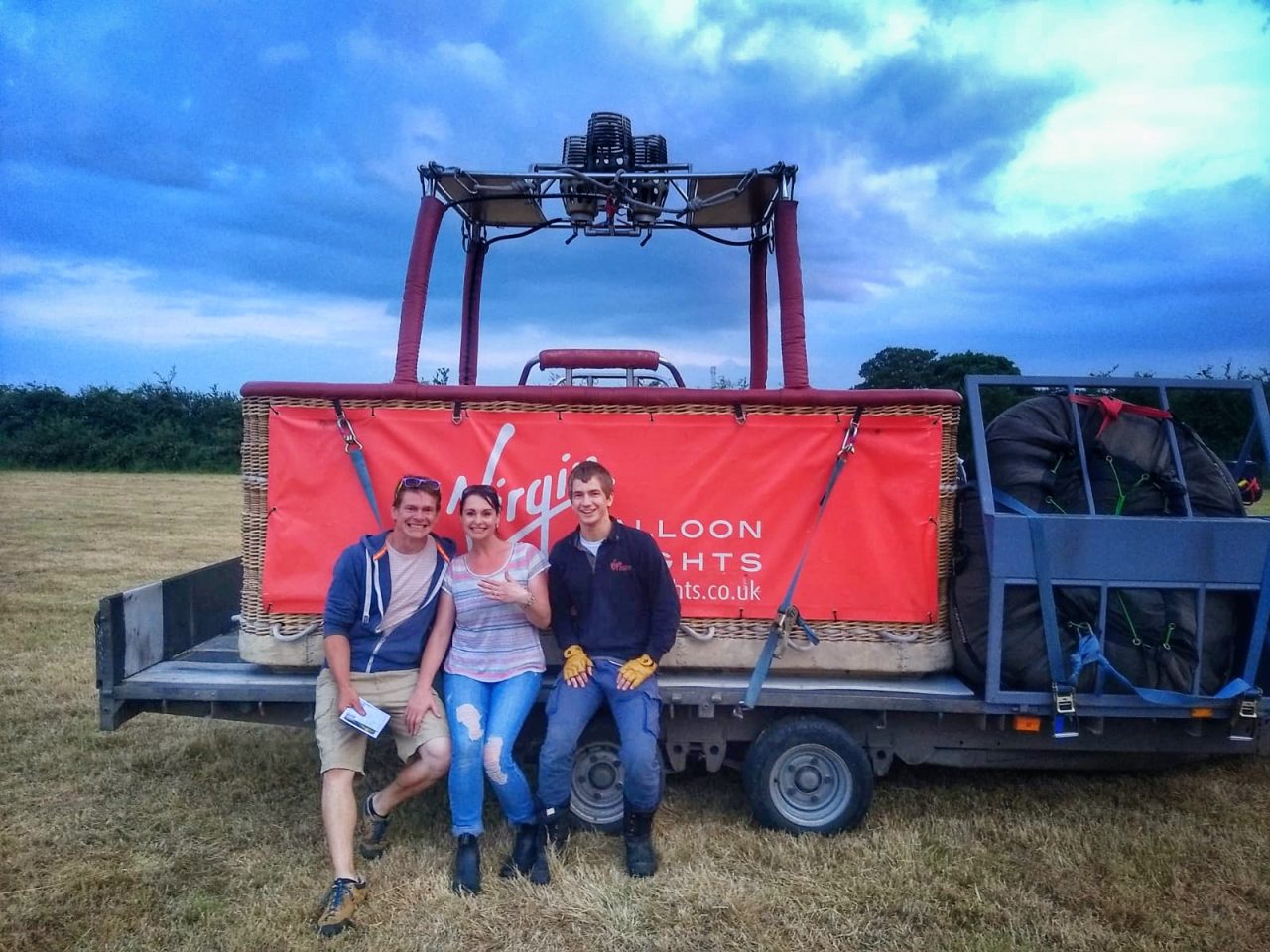 Their story of surprise engagement also started with a birthday gift.

It was Matt who booked the flight for Harriet’s birthday, and his intention was all along to propose to her on board the hot air balloon.

Their story goes back to their childhood, as Matt tells us:

“We grew up together and our families always said we would marry.

"We originally got together when I was 18, but it was the wrong time for both of us and we separated.

"But 18 years later we got back together and here we are!

"We have been back together for nearly a year now having been friends for over 30 years already.”

His proposal crowned a true lifetime relation, evolving from friendship to the next level.

Now, Matt reveals the fact he is very excited for him and Harriet to get married soon. They have already started to talk wedding plans.

On Cloud 9 Since Her Virgin Balloon Flight

Richard went down on one knee after the flight and popped the question to Samantha. 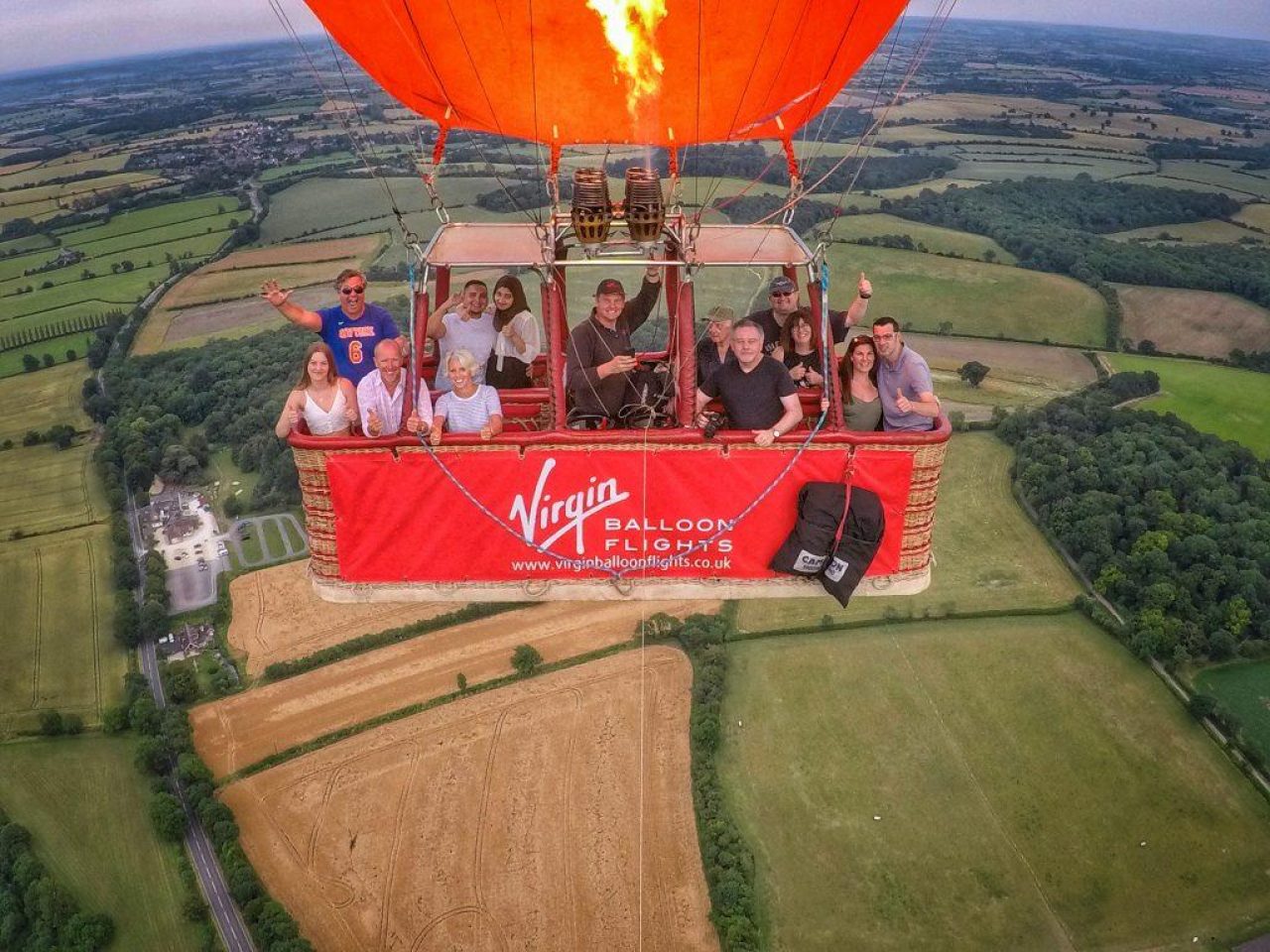 She shared with us how she felt throughout:

“I was in complete shock and actually cried all the way through it.

"Poor Rich was on one knee a good while before I said yes as I was in complete shock and couldn’t speak.

"I however did not play it cool and chucked my full glass of bubbly down myself as I was shaking so much.

"It was however the most amazing, unforgettable moment and I’ve been on cloud 9 ever since.”

Samantha and Richard’s engagement story began last year, when she bought him the flight for his birthday.

After a few cancellations, their dream experience came true. She did not suspect anything, as you could guess from her account above.

Richard asked for permission from her mum, dad and stepdad, before taking this step.

Now, they will keep this great story to tell for the rest of their lives.

As Samantha says, they both loved the whole experience:

“The balloon ride was absolutely amazing and I would highly recommend it to anyone.

"Our Pilot Russell was brilliant, friendly, funny and had such a calming presence. 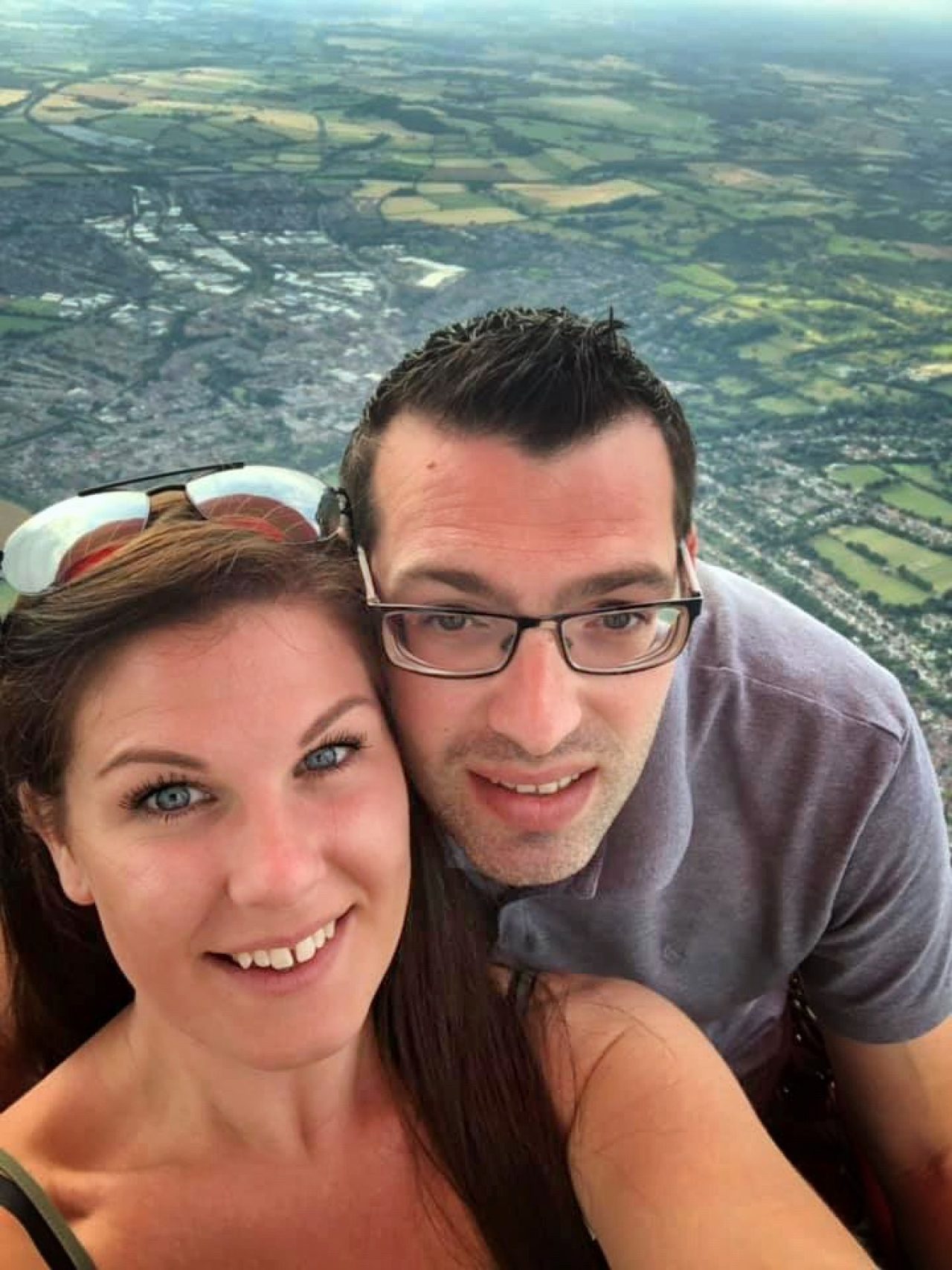 A... Lego Proposal This Tuesday

No sooner have we talked to these happy people, that another couple got engaged on a flight this Tuesday!

We even wonder – are Tuesdays auspicious for engagements aboard our Virgin balloon flights? 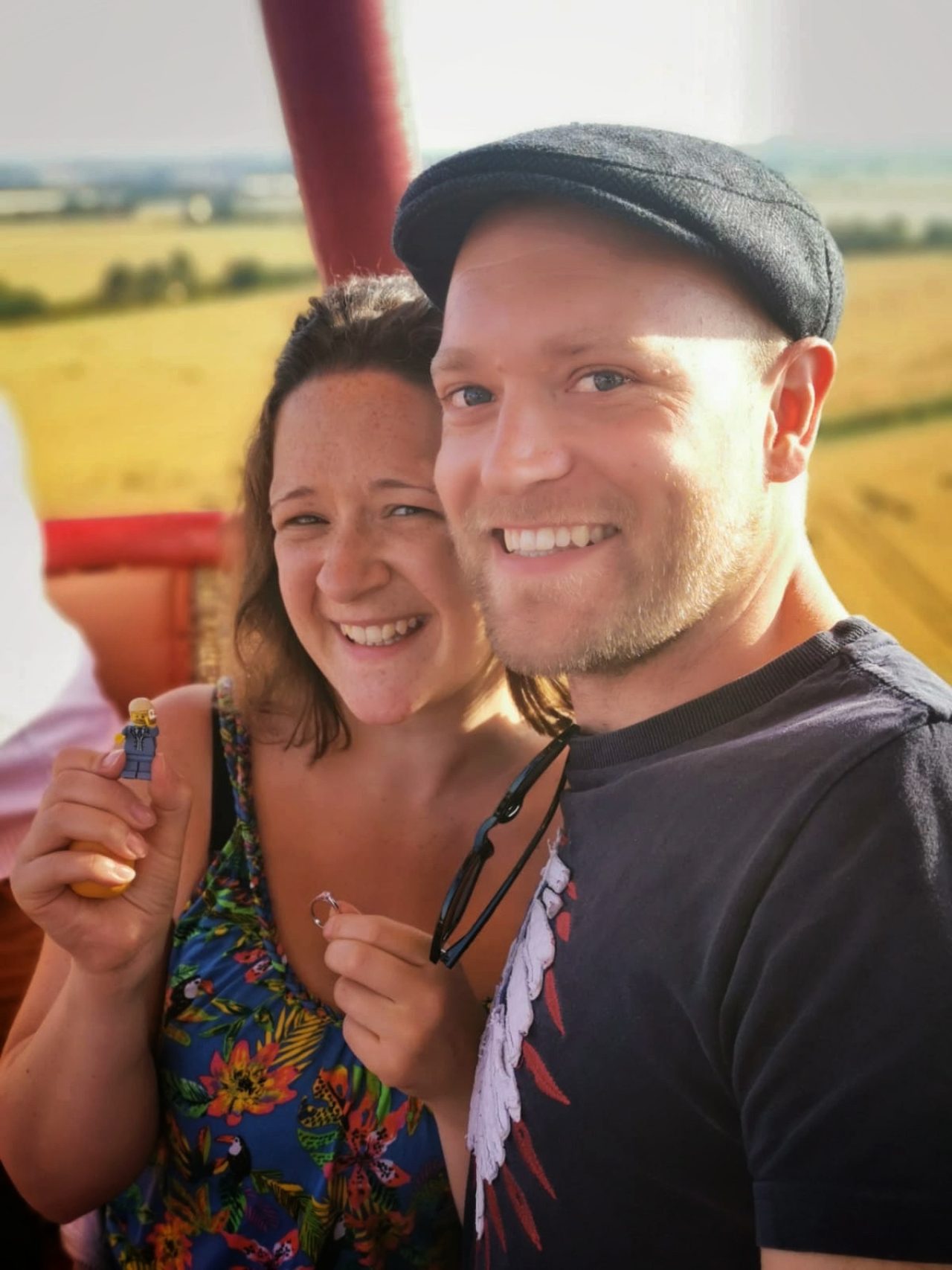 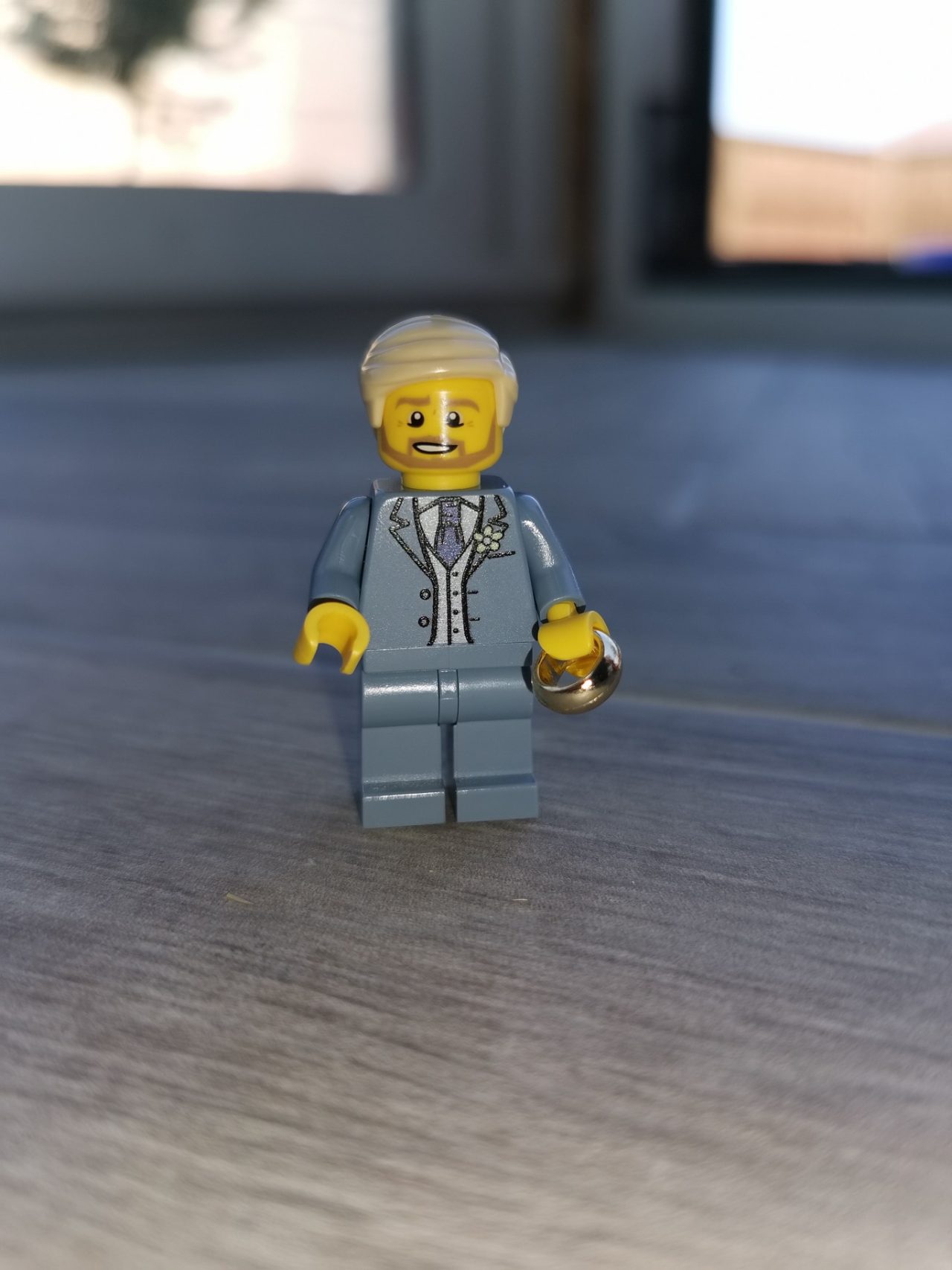 Andy’s proposal story features a Lego version of himself carrying the ring:

“It was a surprise that I had been planning for a while.

"I bought a personalised Lego figure with a little Lego ring which I put in a kinder egg capsule and told Rosie that I'd just happened to have had a kinder egg the day before which came with this.”

He bought the flight last year as a present for Rosie’s birthday. As she was pregnant, they postponed flying to after they had their child.

Now, the Lego version of Andy popped up carrying the ring on what the two of them say was an amazing experience.

Andy wrote to us about it all:

“The flight was spectacular. We really enjoyed being part of it all and lending a hand before and after.

"Helping with getting the balloon ready before and put away after made the experience so much more enjoyable.

"Kerry and Andy, the crew, were fantastic at explaining exactly what was going on and getting us to help when we were needed.”

It feels great to be part of so many people's special moments, such as their engagements, and we will certainly have many more such stories to come.