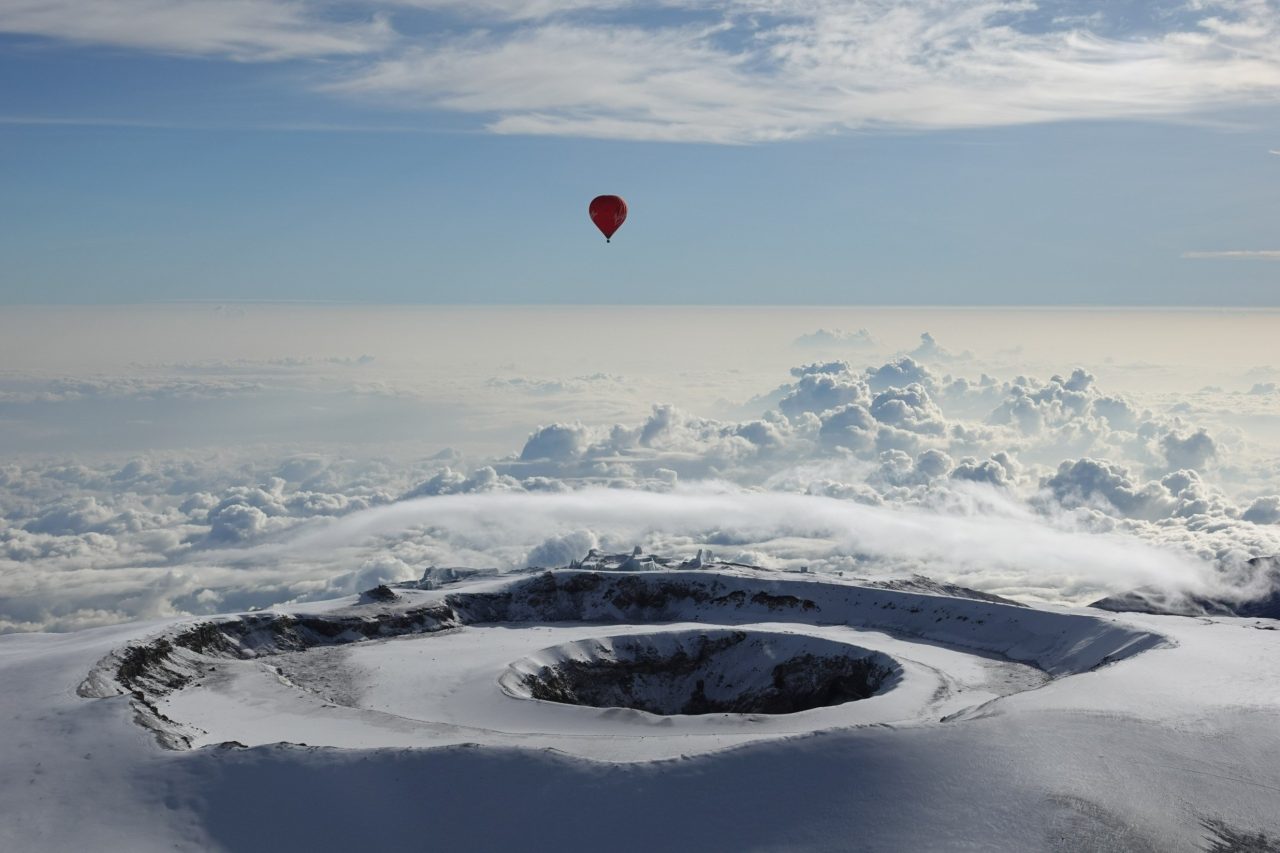 Mount Kilimanjaro, the Ngorongoro Crater and a Virgin Balloon!

In December 2021, Ultramagic Balloons and David Bareford, the father of Virgin Balloons pilot Dominic Bareford, experienced the trip of a lifetime! David was part of a group of extraordinary pilots from around the world that would embark on an adventure with two specific objectives; fly over Mount Kilimanjaro, then be one of the first to fly in the Ngorongoro Conservation Area in northern Tanzania, crossing the Ngorongoro crater from side to side.

David is no stranger to challenging hot air balloon rides having accomplished this trip exactly ten years previously with Ultramagic in 2011. He has also won the National championships on 9 occasions, the European championships three times and won the World championships in Saga, Japan in 1997 and Chatellerault, France in 2002 flying in an Ultramagic balloon. He won the bronze medal at the first World Air Games held in Turkey in 1997 and he has flown competitively in many countries of the world including the U.S.A., Jamaica, Jordan, Turkey, Australia and Japan. If anyone could take on a challenge like this, it was David! 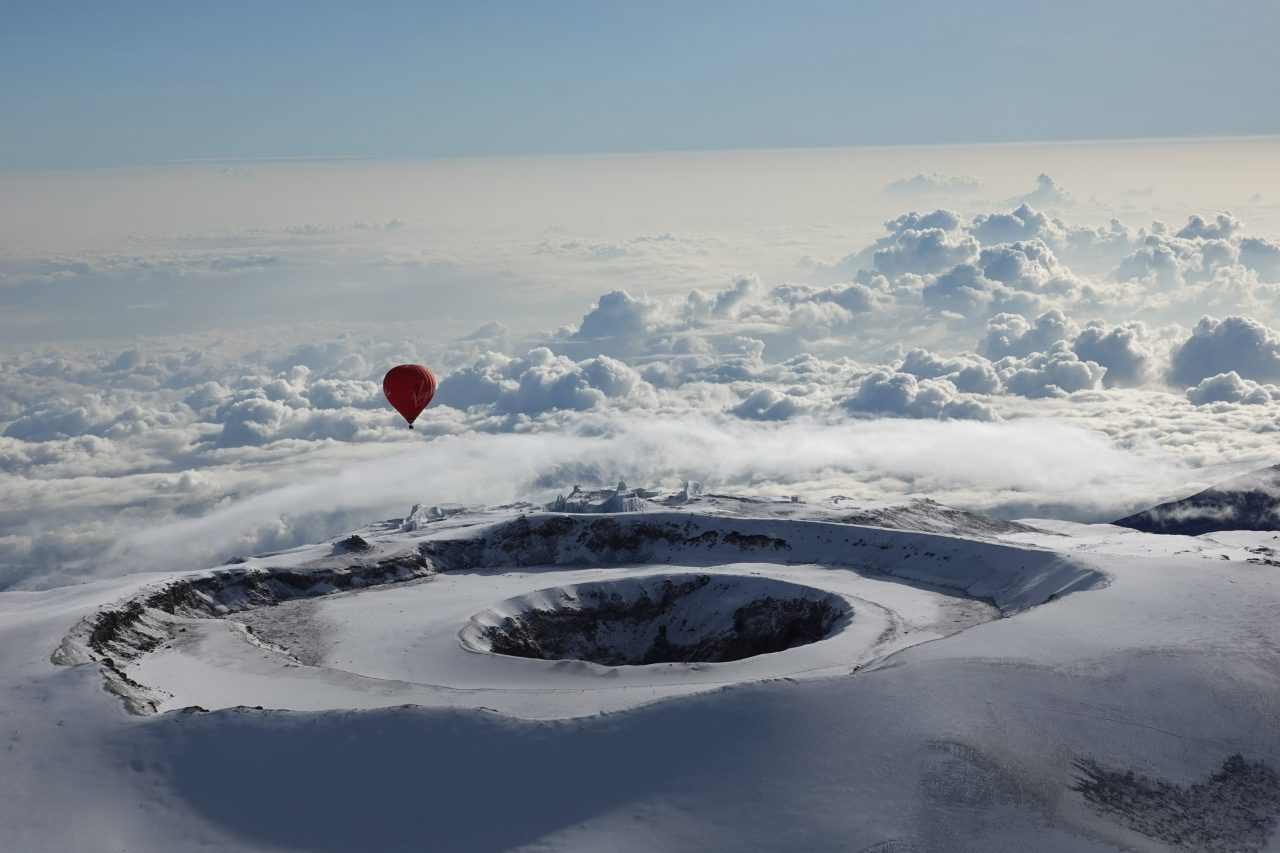 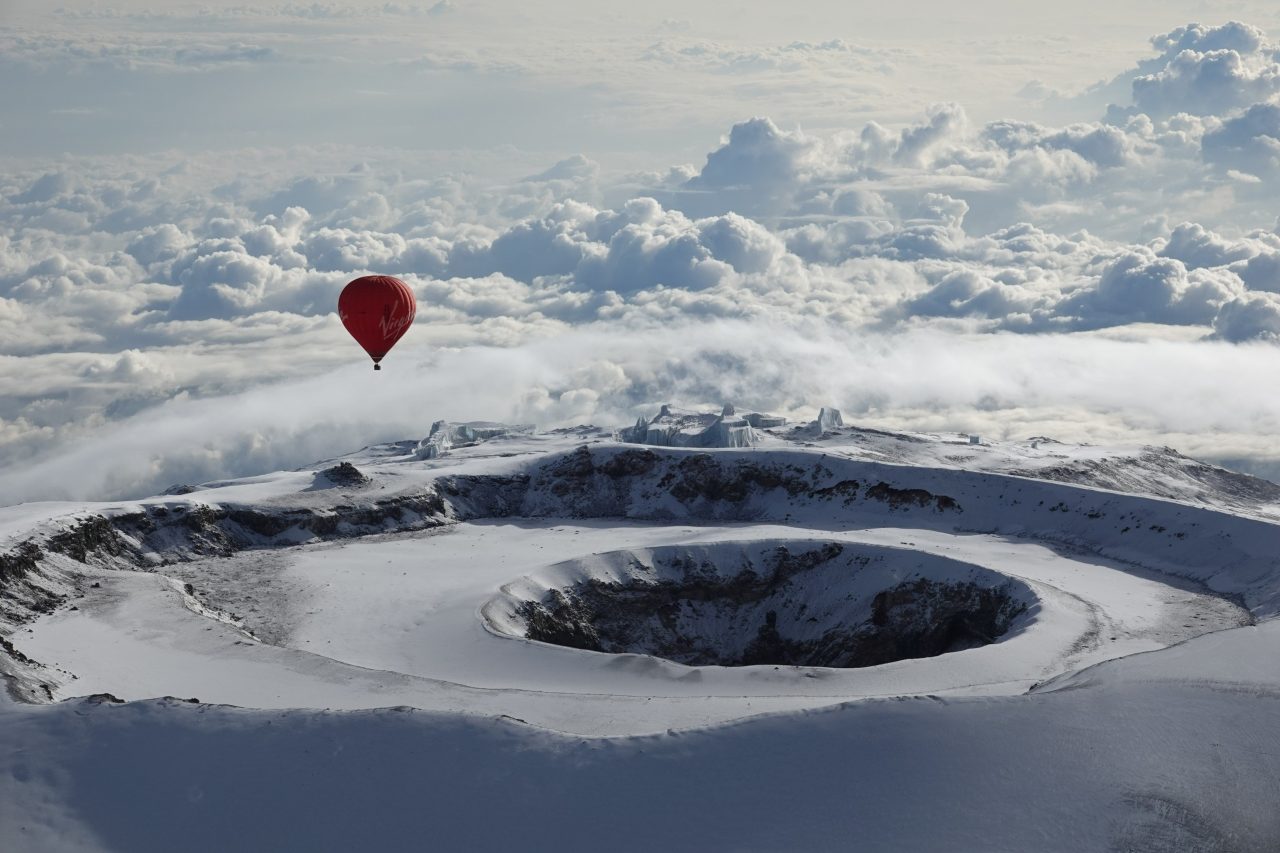 How It All Began!

Ultramagic began flying balloons in 1978 and in 1980 started an expedition to Africa on a trip that lasted 11 months. Inspired by the book by Jules Verne called ‘Five Weeks in a Balloon’, the owner, Josep Maria Llado, copied the idea which then consequently saw 2005 become the start of a successful expedition business.

By invite only, this expedition in Tanzania included 15 balloons and approximately 80 people, including Ultramagic employees that have been with the company for years and contributed a great deal to the respected Ultramagic business.

A trip of this caliber is for the best pilots in the world for a reason as it’s never without its risks. The trip to Mount Kilimanjaro back in 2011 tested this statement to the limit when one party landed their balloon 16,000 feet up at the edge of Kilimanjaro. Joseph Maria assisted the retrieval of the balloon by taking a balloon fan, gathering his daughter and some porters and trekking for one and a half days to recover the balloon after the occupants had already been rescued. He then inflated the balloon and flew it away!

The 2021 expedition stipulated that the participants needed a balloon of over 140,000 cu ft for the long high flight over Kilimanjaro so David borrowed one of the Virgin 250 balloons which means it holds 250 000 cubic feet of air. 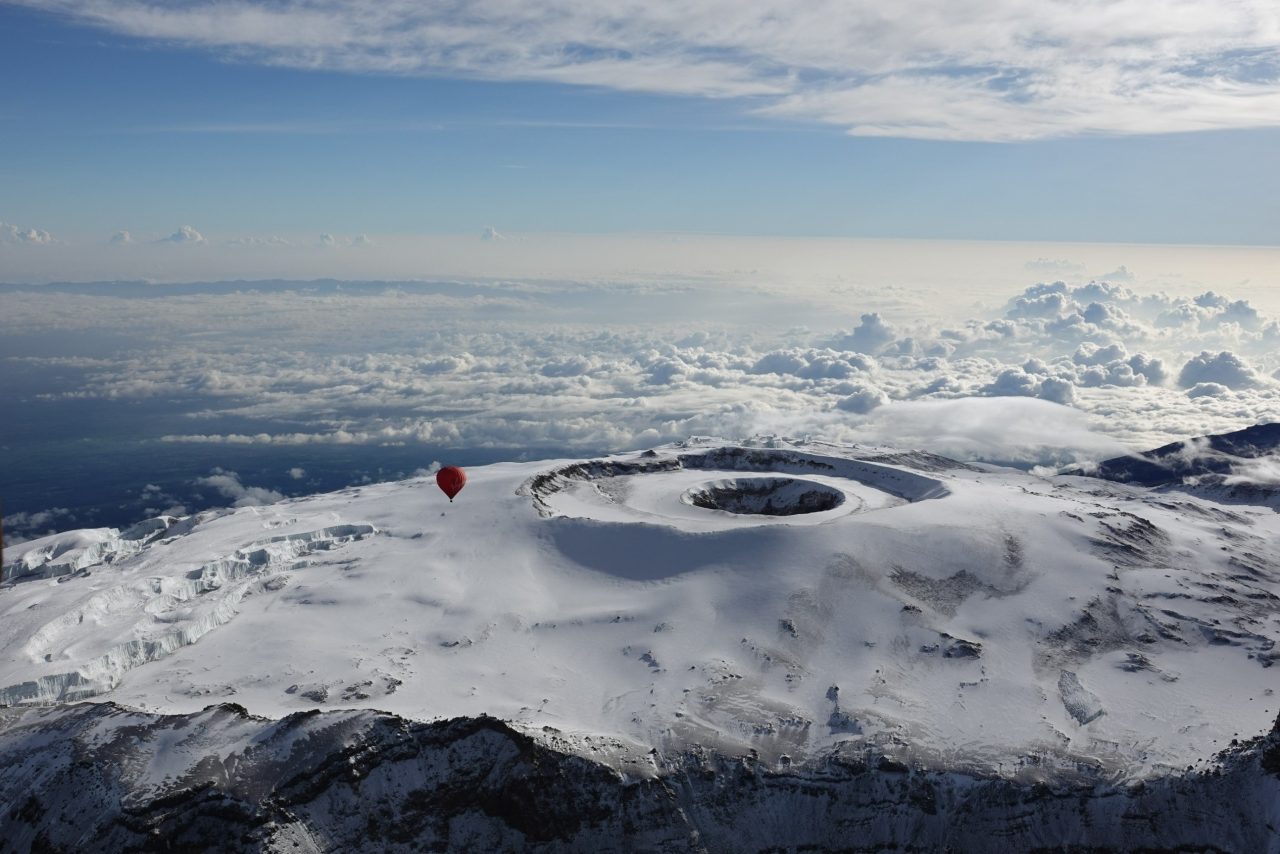 On the morning of the Kilimanjaro flight, they took off at 5.45am after an early deluge of rain which had fortunately stopped by the desired take off time. David had a team of five on board consisting of friends and a Dutch photographer who was taking his first ever flight! Because the official photographer was on board, they were the last to lift off.

“The launch site was at 5,300 ft amsl and within a couple of hundred feet we had entered cloud. We continued our steady ascent, breaking cloud at about 8,500 ft, to be greeted by a clear sky above, the two mountain peaks of Kilimanjaro clearly visible in front of us and the castellated cumuli of the rain clouds behind us. As the gas was predominantly butane, we had pressurised three of the cylinders with nitrogen, but the others indicated a pressure needle barely reaching green meaning almost a constant burn on the climb. We were still heading south at about 5 kt but as we climbed above 10,000 ft we started to turn towards the mountain. At 15,000 ft and still climbing it was time to put on oxygen. At 16,000 ft we were heading straight for the first peak of Mawenzi, 4 miles distant and from there, the crater on Kibo peak 7 miles beyond. We could see most of the early balloons way ahead of us and mostly to the left of the peak but by staying relatively low I found a direction that would allow us to steer towards the crater. We passed close over the peak of Mawenzi and then descended slightly to line ourselves up for the main peak and crater. After just over an hour’s flying and 19 miles from take-off we passed straight over the crater with 1200 ft to spare lobbing a competition marker into the crater as we passed!” said David. 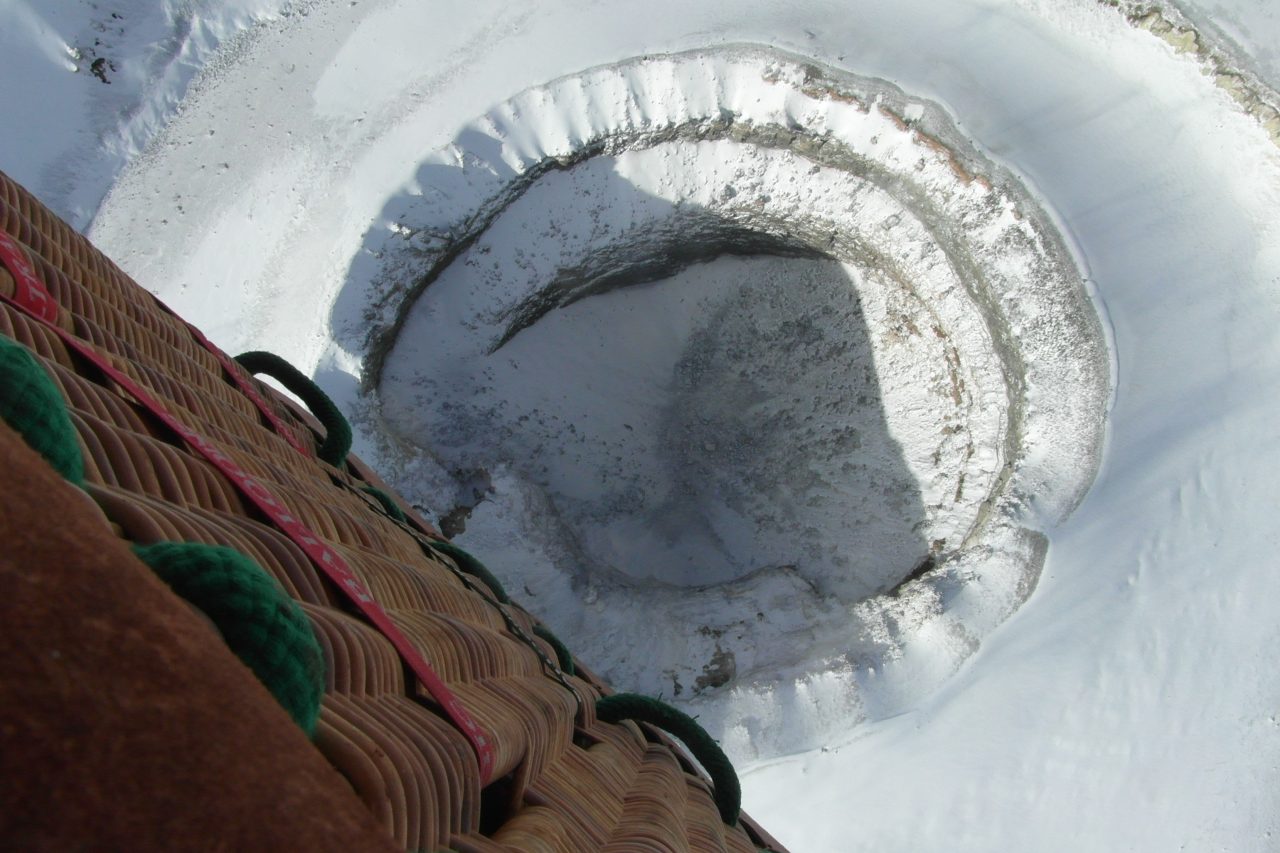 “We flew on and at the far side the wind speed was slowing, dropping down to about 8 kts and I became concerned that we would not have the duration to fly on to the landing area 15 miles beyond. After another hour and getting slightly nervous we had just reached the rainforest belt with the speed now down to barely 5 kts. We then heard on the radio from Stefan Zeberli that there were still about 20 kts at 10,000 ft. The ground below us was presently 11,000 ft; we started our descent and at 14,000 ft started to pick up speed and soon had increased to 12 kts. There was broken cloud below, so we flew on for another 30 minutes by which time the cloud had cleared and we were now well over the landing are on the far side. We initiated a descent virtually coming straight down from 10,000 ft to a stand-up landing near the road at a height of 4,800 ft amsl (above sea level). We had flown for 50 miles in just over three hours and still had about hundred litres of fuel left.” he explained.

When asked how he felt about the whole experience, David said “This was probably one of the best flights I’ve ever done. When I did it 10 years previously, I had regretted not dipping down and really seeing the crater so I was glad I had a chance to go again and really appreciate it”. 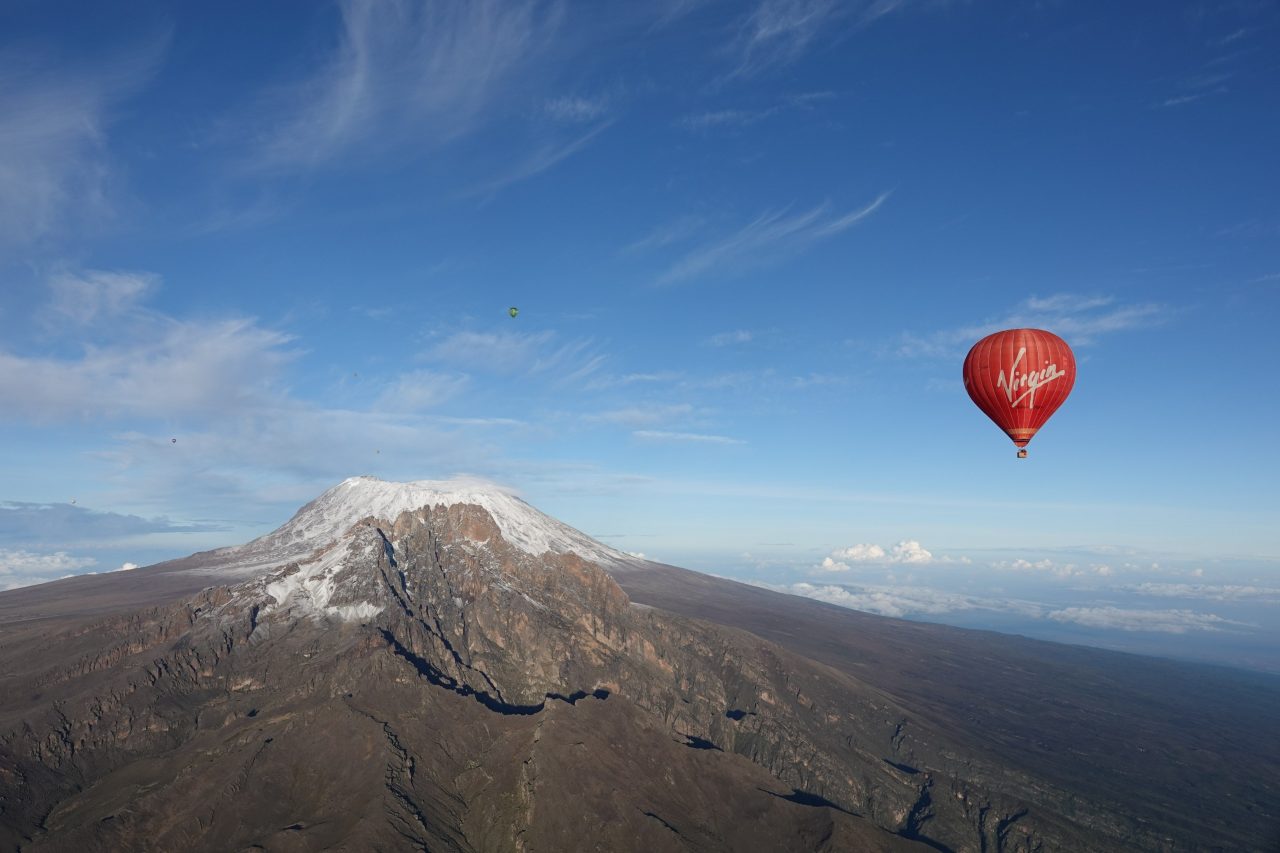 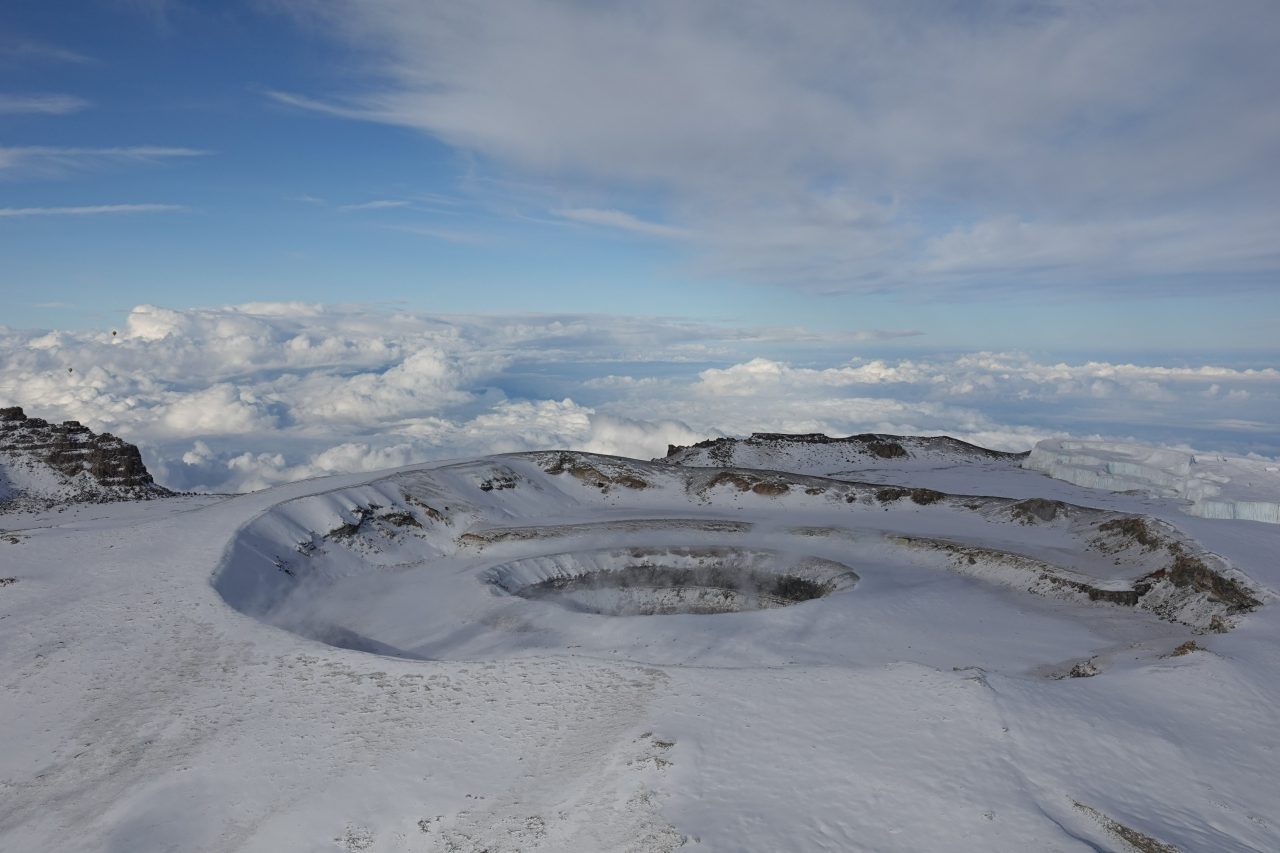 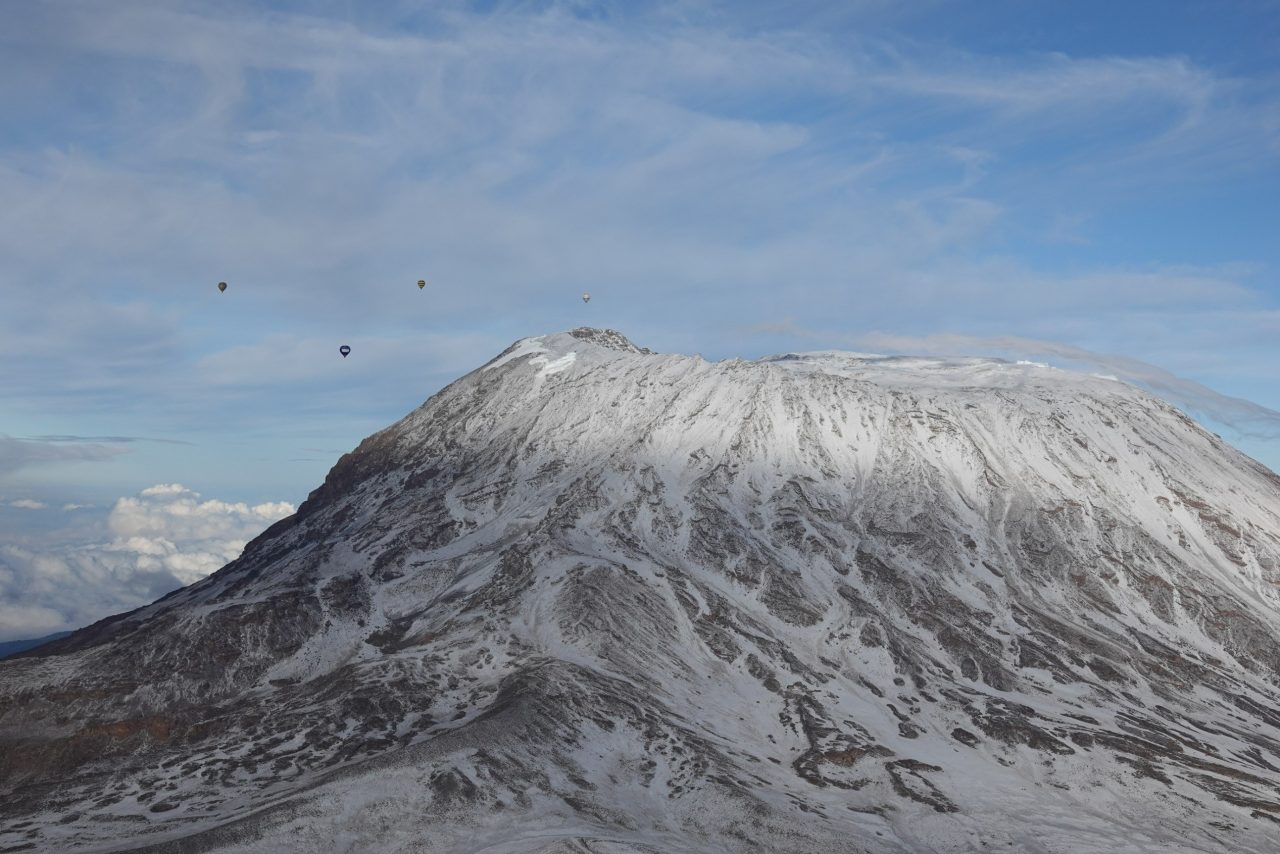 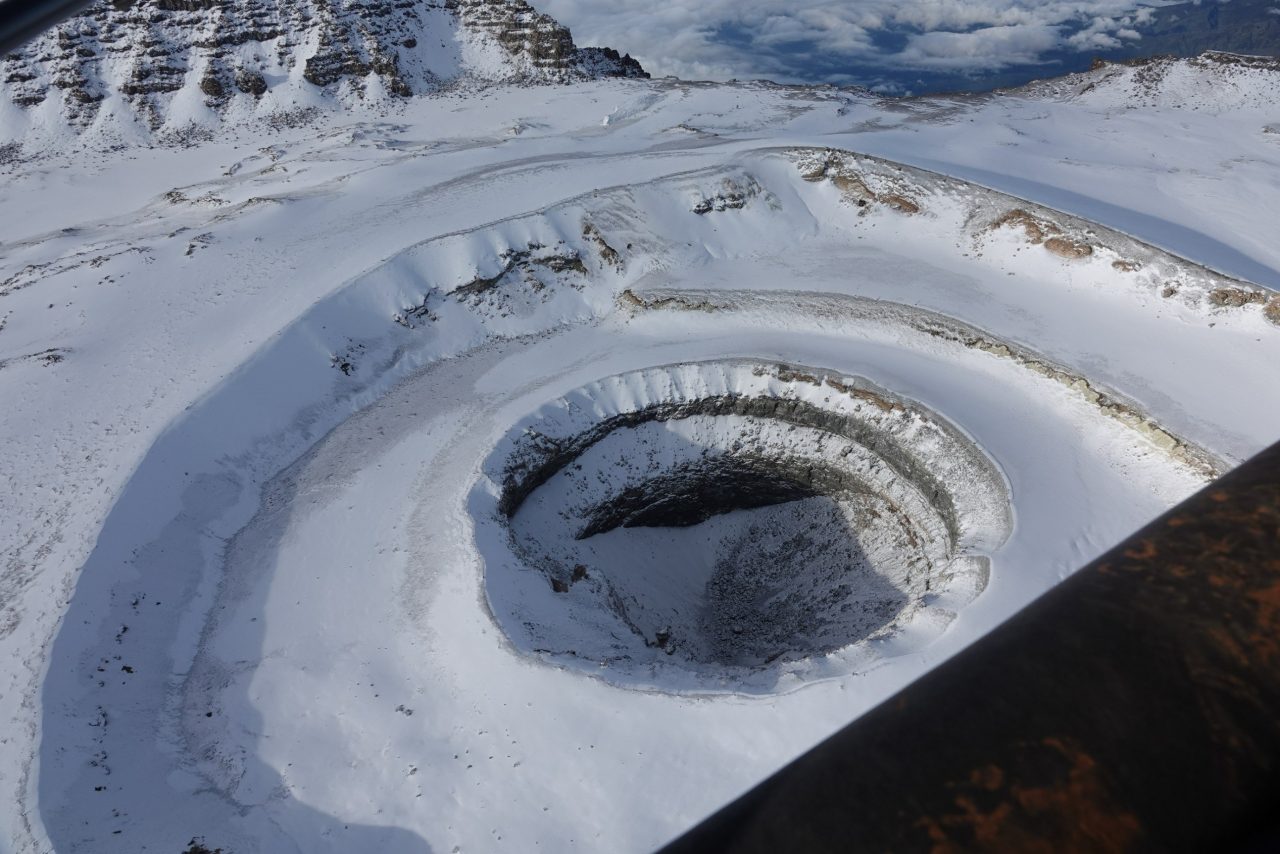 No Rest For The Wicked!

With a second flight over Mount Kilimanjaro under his belt, there was no time to celebrate in their success as they were off to Ngorongoro, a large crater 12 miles in diameter with steep sides enclosing a wildlife sanctuary devoid of people. Josep had been trying for years to fly in or over the crater and this would be the first time balloons were to be given permission.

The team rose at 4am for the drive down to the launch site with a stiff breeze that looked like it might jeopardise the whole operation. They were given information about the stipulation of the permission to fly that they were not allowed to land in the crater and so had to fly out beyond. 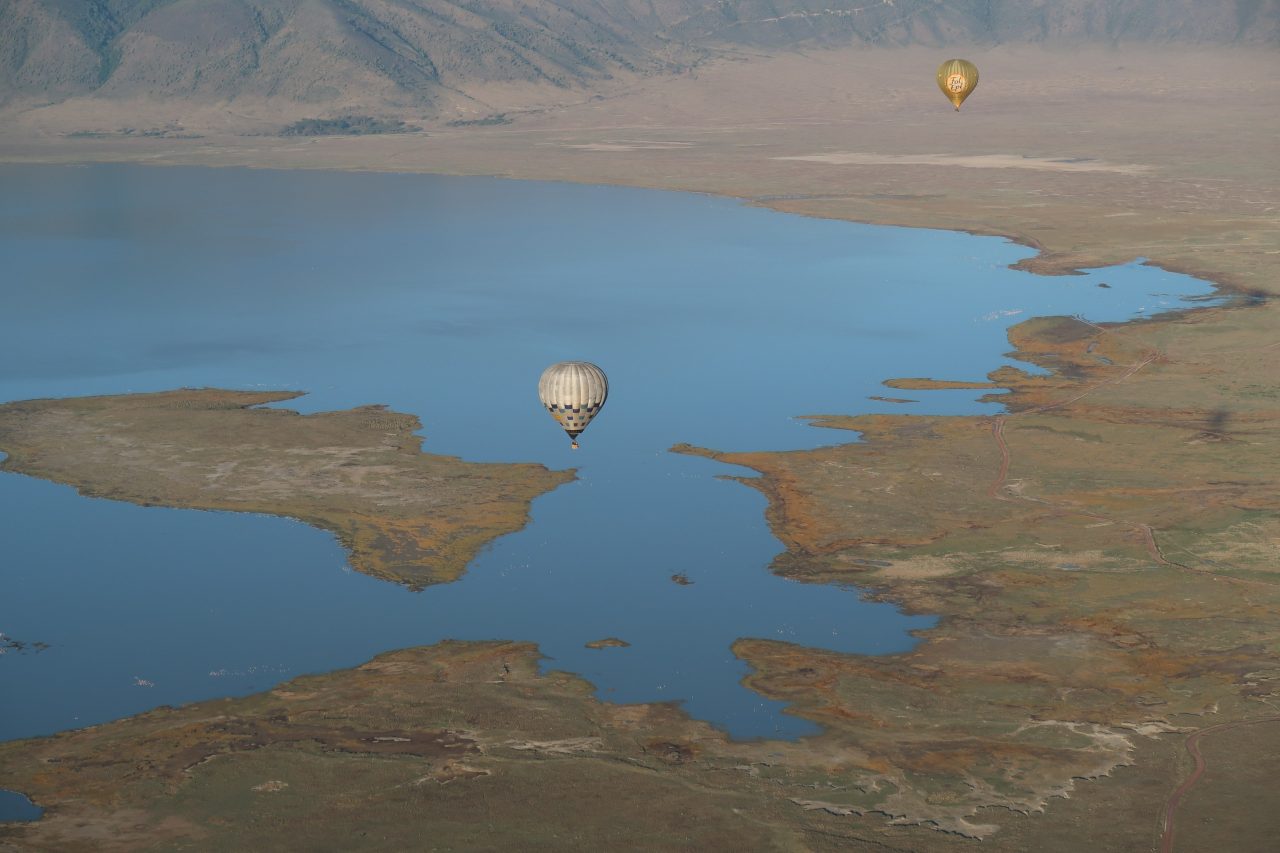 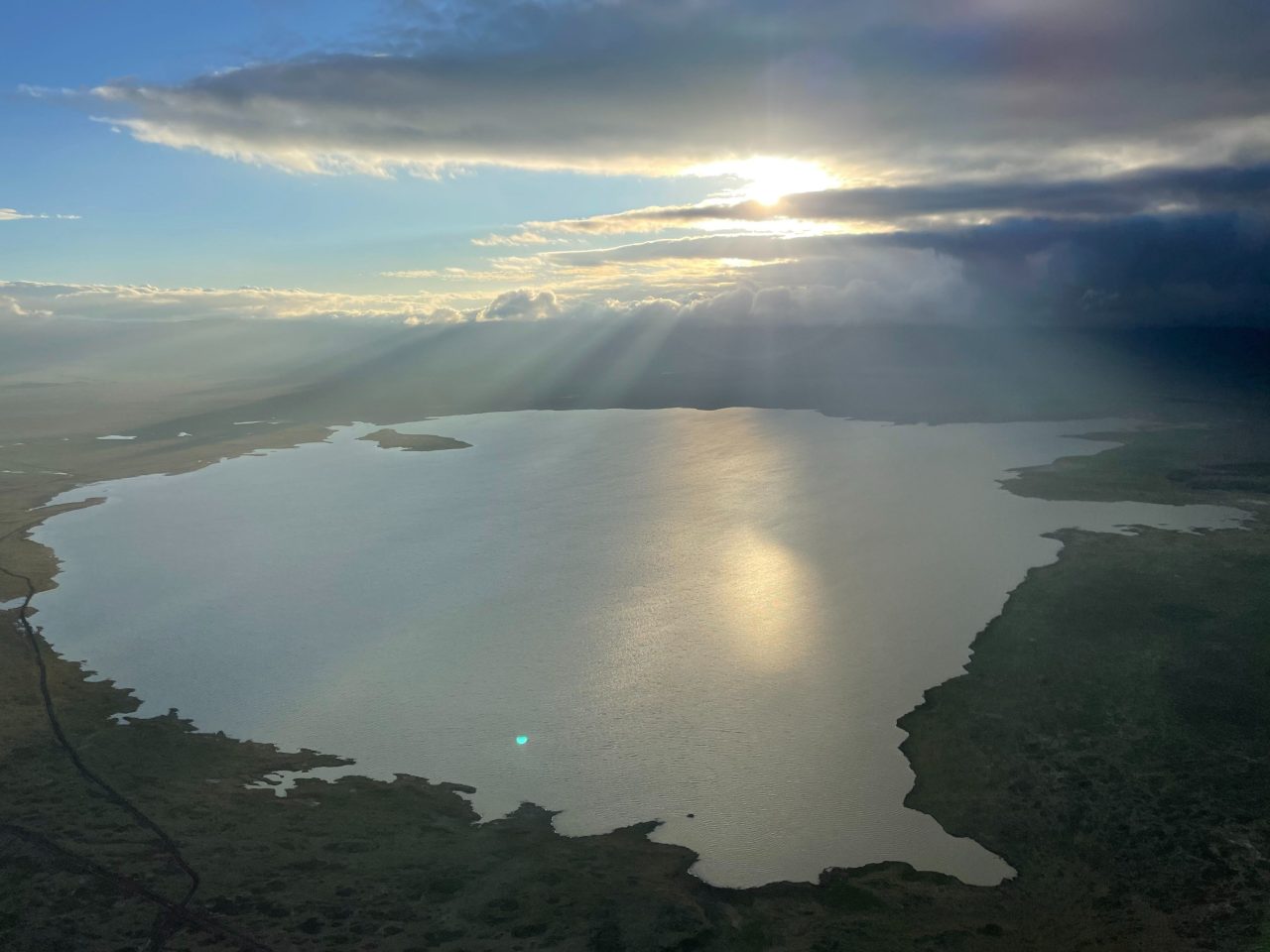 “The wind direction looked as though it would take us over a tall mountain beyond the crater edge to the west which the approaching dawn revealed, covered in cloud. As I prepared, the wind abated slightly allowing the balloon to inflate without problem and we were soon off. The wind picked up again and several balloons had difficulty in inflating behind with two managing to drag their pickup vehicles across the launch site. By staying low but above the stipulated 1000 ft over the animals we tracked north-west straight across the crater and the large lake in the centre with great views of elephants, herds of zebra, wildebeest and buffalo. After an hour we crossed the crater rim passing over a herd of giraffe and headed out towards a large flat plain close to the road that ran from the crater rim down towards Olduvai Camp. We dropped down towards the plain covering the next 15 miles in only half an hour landing at about 20 kts on very firm but flat scrubland” said David.

As shown in the photos, the views and the atmosphere are incredible so to have been there will have been unforgettable. “With the pandemic now into its second year it had made this adventure all the more special and memorable. On the way home, Josep was already planning the next adventure” said David and we fully believe that he will be there again!

Thank you to Pablo Bustos for use of the photos.